We left Hermanus at 5 am with a delicious breakfast and headed to Capetown Airport for flight number 4 to Hoedspruit. It was here we got the bad news about the Packers/Seahawks game from my brother Sean who was still awake and pissed. Bret and I had been worried about missing the Packers games but there just was no way around it with the 9 hours time difference, spotty internet connection and no American tv stations. Sean is at least keeping us entertained at the airport.

As we descended the pilot directed us to look out the window so we could see all the wildlife. That was such an unexpected treat! The airport is essentially a hut. There is no baggage claim, the bags come out on a truck and trailer in front of the “airport”.  On our long bumpy ride to our lodge we saw several wildebeest, giraffes, warthogs, and zebras. It was another mini safari. At one point I spotted a wildebeest and our driver kicked our small SUV into reverse and sped back so we could watch them for a while. Our guide says we came at a great time and that we should be able to see all the animals, well except an anteater, because he’s been here for 7 years and still hasn’t seen one. Once we arrived at Thronybush Game Reserve we had to go through a security check complete with an enter at your own risk sign. He dropped us off at the main lodge where our Spotter (who sits on a seat on the hood of the car to spot animals) was to bring us to our room at Monwana. He arrived in a large green land rover with no roof and stadium seating; this will be our safari vehicle for the next 3 days. On our way to the room our spotter stopped abruptly! He staired at the ground, looked left and looked right and then reversed quickly and drove into the thick bush. He spoke no words to us, so we thought we might be lost, and then he whispers “Elephants”. It was a “WOW” moment! There we were, feet from these beautiful and monstrous animals. We drove behind them for a while and it was almost as if they were leading us to our room (even though I think they were running away from us) 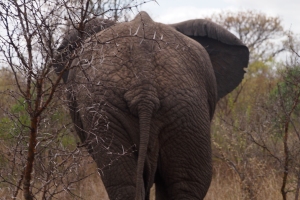 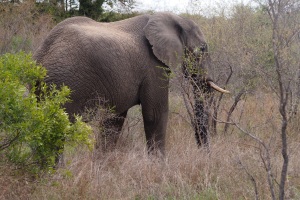 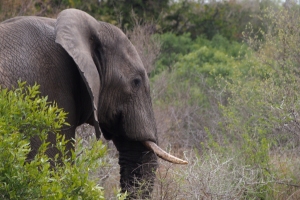 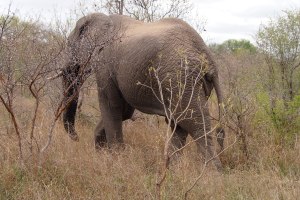 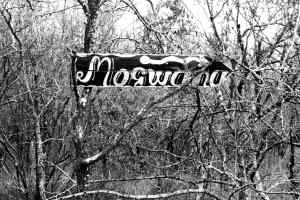 When we arrived at Monwana we were greeted by Karen. She had hot towels and a tropical looking drink for us. The staff took our bags and Karen showed us around the property ending at our accommodations, the honeymoon suite. We had a 2 huge bathrooms, one with a glass shower overlooking the bush, a walk in closet and a patio that overlooked the watering hole that animals drink from.  We can even game watch from our bed. This is my definition of glamping. 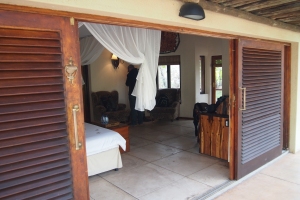 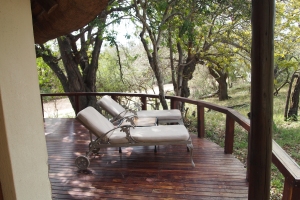 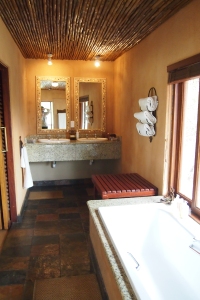 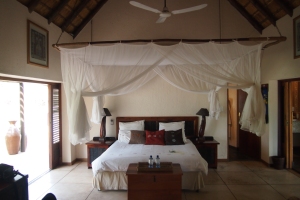 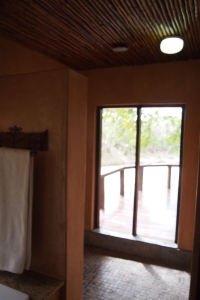 Karen informed us that there would be high tea at 3 (lunch) and then we would go on our first evening game drive. This is where we met our ranger and Karen’s husband, Ryan. They told us we would have one more couple with us for the game drive. Jason and Jazmin ended up being a young couple from Atlanta that originally came from Pittsburg, our new home. It is such a small world. They take big vacations every year; last year they did the Amazon, before that China, and now South Africa.

After high tea we boarded our ride. Ryan has a huge gun on the dash which was comforting but I am still nervous. Bret and I sat on the very top of the land rover. Before we took off Ryan gave us a breakdown on the Safari Rules:
1. Do Not Stand. You may get comfortable because of how close we are to them but the animals are only used to the vehicle shapes; if you “break the plane” of the vehicle anything could happen.
2. No bright colors.
3. Be as quite as possible.
4. The African sun is hot. Protect your heads and skin.
4. DO NOT STAND!!!!!

The first animal we spotted was the White Rhino. Ryan reiterated the danger that Rhinos are in. Poachers are killing these amazing creatures at alarming rates for their horns. It is extremely sad to hear about the senseless murder of these innocent animals. Ryan says they are on their way to extinction and he made sure that we did not take for granted seeing rhinos in the wild. The Rhino didn’t move much because he was conserving energy.  After he was done eating, he dropped down with a huge thud to take a nap. 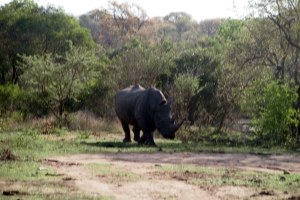 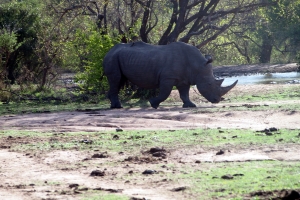 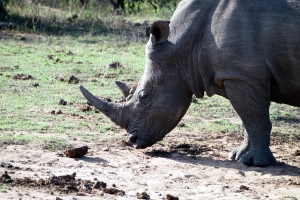 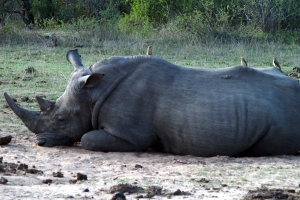 Next we saw several cape buffalo. They were caked in mud trying to stay cool in the hot sun and were very lazy. They were not OK with us watching them so they took off. We followed them for a little bit but they weren’t doing anything terribly exciting so we moved on! 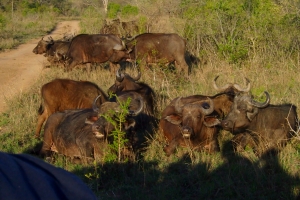 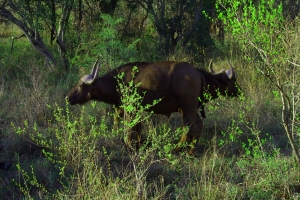 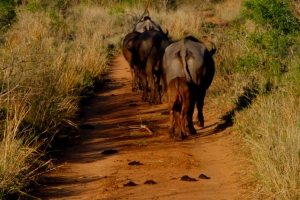 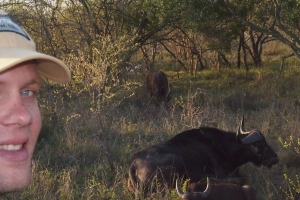 We drove for about 5 minutes on the trails before we took a turn into the thick bush where we saw the lions!!!!! Bret says we were about 40 feet from them but it felt so much closer (like 10 feet). There were 3 females and 1 male. According to Ryan this male did not belong with this pride and that he could see a lot of tension between him and the females. To us they looked like they were all just “hanging out”. Jason said he has heard that a lions roar can shake the ground, Ryan agreed that it is a very intense sound. Not 30 seconds after this the Lion jumped up and ROARED at the 3 lionesess, who in turn jumped up and began a tense standoff. I broke rules 1, 3, and 5 as I jumped into Bret. It was the scariest thing in the world, there was nothing between him and us and he was pissed! After a lot of circling eachother and several minutes of huffing and puffing they all came to some sort of resolution and went back to “normal”. I wish I would have gotten more photos of this but I was frozen in fear. We watched them for a little bit longer to assure nothing else would happen and then we headed out for our sundowner. AMAZING!!! 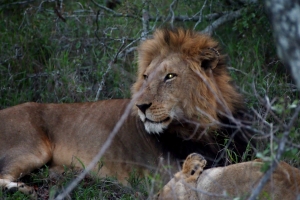 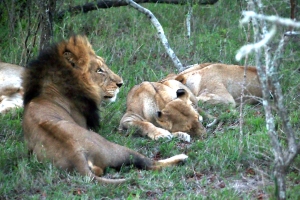 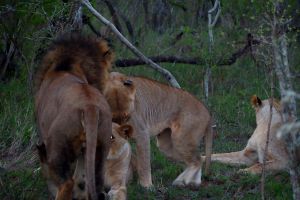 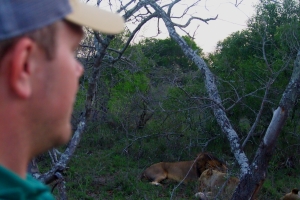 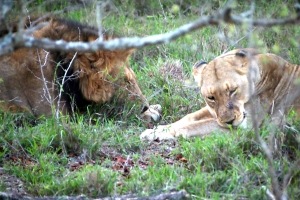 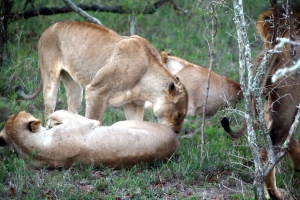 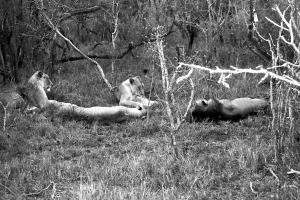 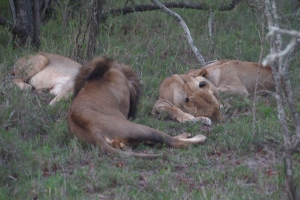 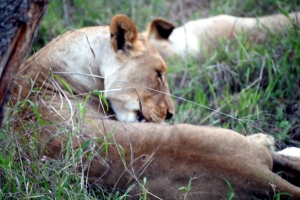 The sundowner is where you drink beer, eat snacks, and watch the sun set in the bush. We were all on an adrenaline high from the lions and were trying to disect what we saw. Being out of the car was nice until it started to get dark. Ryan heard a wildebeest in close proximity doing danger calls and this made him nervous that we had a big cat in the area. We all hurried into the rover and headed out. 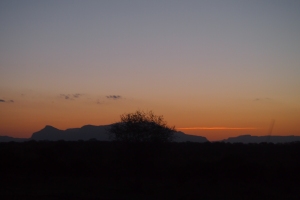 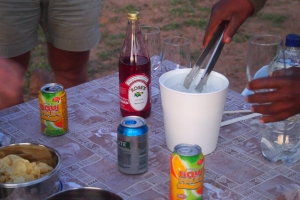 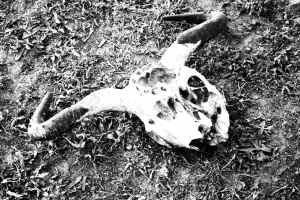 The temperature dropped significatly so Bret and I had to put on our jackets and use the blankets on the rover to stay warm. There were no more sightings tonight but it was so much fun riding around in the dark in the African Bush. I can only compare it to a romantic carriage ride or hayrack ride. We drove around til it was pitch black and then headed back to our lodge. We had a delicious, candle lit, 4 course dinner on our balcony. Bret sat with his back to the bush because I was terrified that a lion was going to jump out and eat us (candle light was our ONLY light). My hero! After dinner the lodge surprised us with champagne in our room, mosquito spray and the mosquito canopy drawn around our bed. Yea for champs and no malaria! We cannot believe how amazing this day was. Cheers!